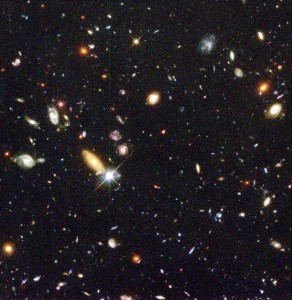 Each moment has its life and its death; otherwise, existence is impossible.

The film is almost indescribable in its artistry and overlapping themes, but David Brooks of The New York Times writes a stunningly beautiful review of the movie entitled, Love and Gravity, that is, I think, a work of art in and of itself. In his review Mr. Brooks points to the movie pointing to this interconnection of seemingly mutually exclusive things: science and faith, and science and our love for each other. In fact, they are intertwined, and faith and love become their own field and dimension.

And so it is, I think, with Peace. It can be a super- power, but it is dependent upon and intertwined with so many other things. Like the movie, it is dependent on our attraction to and seeking out of something or someone out there we cannot see, who spans time and space, generations, life and death—a God who is invisible but is still reaching across time and space to be with us. It is impossible to connect with him if we don’t extend ourselves to meet him. That is the cosmic, fun side.

There is also the mundane side of peace– muscle memory. Peace is a practice.

I suffered a brain injury as a result of a car accident about two years ago. I am now ok. Before the accident, I was a fairly accomplished pianist and was in a band singing and learning the guitar. I lost my memory of how to play these instruments. Because I lost the intellectual memory to process these things, I didn’t even try. Because I didn’t even try, I lost the muscle memory. When my intellectual memory of the chords and notes returned, my hands and my voice would not respond to the commands. Once I just started moving my fingers it was terrible at first, but within a couple of weeks, the music began to sound like something a human being would want to hear. I played a tape of a friend singing to teach myself to sing again. I thought that regaining command of my instruments was dependent on my mind but it was dependent on my love for them and their need to be played.

Peace is like this. If I wait for it to just happen to me, I won’t experience it. To have peace I have to surrender to the partnership with my unseen creator, and for that to happen, I have to practice being mindful that there is a partnership It is dependent on my love for my creator, his love for me and my ability to practice this, if only for a few moments a day. Peace, and the lack of it, is related to control, powerlessness and fear, but especially self worth and humility.

I can’t have peace if I am afraid of the future, regret the past, or don’t approve of myself. I can’t get rid of these afflictions unless I practice peace. I can’t cure my mind and it’s ridiculous thought patterns with my mind. Back to the partnership and the eternal dance.